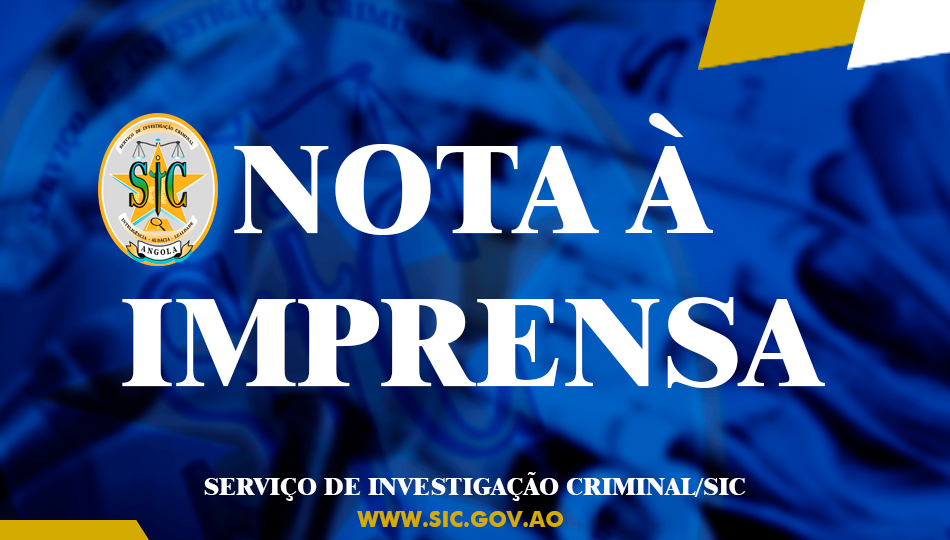 The Criminal Investigation Service, through its Central Directorate for Combating Crimes against Heritage, within the scope of several micro-operations carried out, detained, in Luanda, 6 citizens aged between 25 and 50 years, involved in the crimes of Qualified Theft, Criminal Association, Reception and Forgery of Documents and use of False Documents.

The arrests took place in the last two weeks, in an investigative sequence and in compliance with arrest warrants, searches and seizures. In this action, it should be noted that following the arrest of the main suspect and mentor of the robbery of a wheat truck on the expressway, the citizen identified by Zinga, 48 years old single, was arrested as a matter of urgency, for Receipt of the goods resulting from the theft, Two Kia vehicles, model Rio, were recovered through him, one red and the other gray, both with forged documentation and forged license plates. And still in this case, the citizen known as Charles was determined to be the author of the Tampering of the Identity Card data used to recognize the purchase and sale and request a duplicate of the Booklet in the DTSR.

Another highlight is the recovery of a Hyundai brand car, model Azera, blue color, whose owner had given it to a friend (on the run) to do rental services for weddings, this in turn, went astray, having been found in owned by a citizen who claims to have acquired it for 9 million Kwanzas,

Another note refers to the recovery of a Dong Feng brand vehicle, in blue and white, stolen on October 28, at around 1:00 am, inside a house, in the municipality of Viana, urban district of vila flor, neighborhood boot Mutamba. Upon complaint, a citizen was arrested at the time he intended to market the vehicle at the price of 1,500,000.00, and in the investigation follow-up an AKM-type firearm used in the robbery action was seized and the co-participants were arrested, who entered the residence through burglary and under death threats with firearms and physical aggression, subtracted 85,000 kwanzas and the vehicle now recovered.

It should also be noted that a Kia brand vehicle, Soul model, was seized at the time the buyer intended to register with the Luanda car registration office, with false documents, through sources, the vehicle and the corresponding documents were seized. It should be noted that so far the legitimate owner of the vehicle has not been identified, so the possible owner of the Kia Soul vehicle, red color, registration number, LD-91-92-GS, is requested to document with the Central Combat Department to Crimes Against SIC's Heritage.

Note that a total of 6 vehicles of different brands were recovered and an AKM-type firearm was seized, with its respective magazine.

However, the SIC warns holders of commercial establishments and kiosks for the reproduction of documents via photocopies, known as cybercafés or Konicas, that they are facilitating the forgery of documents and Data tampering with authentic documents by means of a scanner, which will be targets of the action of the SIC, as this conduct constitutes a crime under the terms of the Law.

INSTITUTIONAL COMMUNICATION AND PRESS OFFICE OF THE GENERAL DIRECTORATE OF SIC IN LUANDA ON NOVEMBER 3, 2021.-